Every week Josh does something new and unexpected during his work out session with Abby. This week was no different.

Josh’s session always starts out with stretching and range of motion exercises. His left leg seemed fine but his right leg was very tight. Rather than risk injuring a hamstring, Abby moved to the upper body. A few weeks ago she started talking to him about getting his hands to meet in a mid line position. 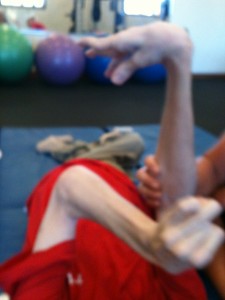 From the floor Josh moves to the ball. I think this may be his favorite part. He surprised us last week by putting his left arm in the push up position without any help from me or Abby. This week, he did something that surprised him.

The last few weeks, we’ve been noticing that he is positioning his knees closer to the ball and more under his center of gravity. This week, while Abby was getting into position behind him to prevent him from being able to go backwards, Josh brought himself upright.

He has been practicing raising his head straight up, and his head came up, and his body followed. He was straight, and midline from the top of his head to his knees and he did it all by himself. 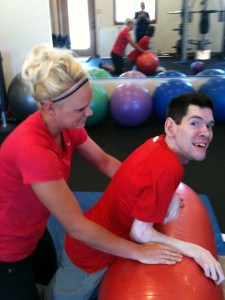 I wish I’d taken a better photo but this gives you an idea of what he did. Look how straight and firm his back looks. Josh continues to amaze me.

Josh does lots of controlled head turning when he’s on the ball but this move is one he thought up all by himself. He’s looking at the ceiling and nothing Abby and I said was going to change his mind. I think he’s enthralled with having control of his head and his eyes. We just sit back and let him enjoy the movements. 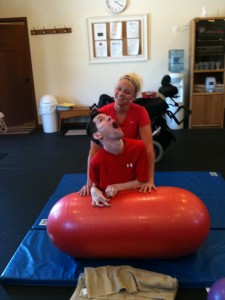 Every week I see Josh do something new. My best memory of this week isn’t an exercise. When Josh went from the ball work, to the floor one big, crystal clear tear, ran down Josh’s cheek. I realized, in that moment, what these workout sessions do for him.

I don’t often step into Josh’s shoes. But for one brief moment in time, when that single tear ran down his cheek, I felt something wonderful move through me. I got so emotional, I couldn’t speak.

I don’t know where these work outs will take Josh but I’m realizing that it’s more than physical. Josh is gaining a sense of purpose, and accomplishment, and strength. It might very well be a guy thing, another aspect of his life that I don’t often think about.

I do know that when his body does something that completely surprises him…when he moves in a way he’s never felt before…it rocks his world. We should all be so lucky.

14 Responses to One Single Tear