I wonder, sometimes, how a non-verbal, non-ambulatory, young man can be so hard to keep up with. Almost a year ago I invited you to come along on Josh’s personal journey. He is an artist, and passionate about becoming healthier and stronger. Normal goals. Goals we all, at times, have.

But Josh’s life is anything but normal. The first advice we were ever given, at Mayo Clinic when Josh was 18months old, was to take ‘normal’ out of the equation. We were told to stop identifying Josh’s development with anything the baby books identified as normal development.

Josh would have strengths, and he would have weaknesses. He would let us know what he excelled at, and what he didn’t, or couldn’t accomplish.

In October, we took Josh for a seating evaluation. His life-style had radically changed. The decision to put a feeding tube in had helped him gain enough weight to put him into the healthy range. His decision to start working out gave him new muscle strength. And his old chair was no longer doing it’s job.

So, in October we discussed his options. Finally, a week ago, he got to go in for his fitting. They pulled a mold and he did his best to make sure it was a good one. He sat as relaxed as he could be and let them mold the chair around his body. I meant to take pictures. I really did, but I forgot. I was so interested in watching him cooperate with the physical therapist and the wheelchair guy. (I’m sorry, I don’t know what his title is)

So we wait. It could take six weeks for the new cushions to get made. I hope and pray this new chair will give him the seating position he needs for comfort and functionality.

On the workout front Josh has already proved us wrong so many times. Abbey told me at Thursday’s workout that Josh had already far exceeded the norm on getting back range of motion. He’s not all the way yet, but his advancement is phenomenal. I figure it’s because he goes after it with his entire will-power. He wants it with a passion you can see. It burns in him and its awesome to watch.

Since I’ve missed so many updates, I’ll simply post some of my favorite pictures from the last few weeks.

What I like about the above picture is his left arm is fully extended. This arm is usually in a full wind-up. For him to have it straight up and putting a lot of pressure on the band is amazing. 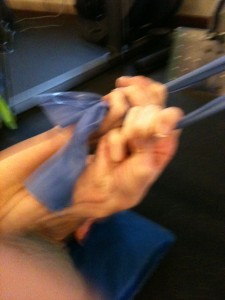 I’m sorry that this is blurry but wanted to show the grip that Josh has on the bands. He brought his right arm up and over (a move that Abbey has tried to get him to do for months) I helped him get the fingers out and he grabbed hold of the band with both hands. So he’s mid-line and he’s working both arms together. This is ground-breaking in my eyes. So often if one arm pulls, the other pushes. He never, ever uses equal strength, with both arms, at the same time. You can’t imagine how excited I was.

a little distance on this so you can see Josh’s reaction. He knows he’s doing something remarkable. The arms are crossed and I don’t know if that affects how he does things at a neurological level. We’re just happy that he’s pulling equally with both sides, at the same time. This is a victory in my eyes.

One more. Abbey has been trying to come up with ways to help Josh attain a push-up position. She decided to try giving him some support under the hips, which raises him up a little bit off the floor. With help, Josh got his elbows in a good position and this is the first time, ever, that we see him in this position. He had equal pressure on both elbows, a fairly good position across his back, and I helped him keep his head mid-line. On his own, he would have turned his head to the right and lifted his left arm off the ground which would have twisted his entire torso. He’s not there yet, but this is the beginning of something new and we were all really excited.

That’s the update for now. I hope you enjoy this journey. It may seem little to some of you, but from where we sit, its like reaching a new peak on our climb up Mt. Kilimanjaro. One step at a time and celebrate the victories, small though they be.