One step at a time

Lots of changes have happened for Josh. He was getting his personal training/physical fitness at the chiropractor’s office. Only the PT left and so far no replacement that can work with Josh has been added to their staff.

Quitting isn’t an option. I came home, dragged out every piece of equipment I owned and analyzed our problem. The solution is to work at home. This is better anyway. We can’t get where we need to be by going twice a week. He needs to be getting help on a daily basis so working at home is our solution. Should have been doing that anyway.

He is working harder at home than he did before and that’s saying a lot. I do have a helper. A neighbor and close friend comes by to help me out. It takes two of us to help Josh get in the right positions.

He’s continuing to develop his arm strength and grip. What makes me really happy is he’s not just hanging on to the resistance bands any more. He’s learning to pull, and release. And from different directions, which tells me he’s beginning to gain some control of the different muscle groups. 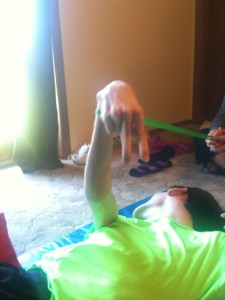 When Josh is trying to move his arms toward the mid-line without anything touching him, he goes through a series of reflex patterns. I don’t even know how to describe it and one of these days I should post a video of the process. 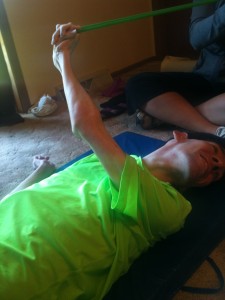 In the photo above, what pleases me (in addition to the arm moving to mid-line) is the fairly straight elbow. Voluntarily straightening his left arm is a win to me.

This movement is a new one. We had him on his hands and knees, trying to get him into a push-up position. He pushed up all right. He started rising up, and he kept going until he was on his knees. Once there, he brought his head into a fairly normal position and proceeded to do slow, controlled head turns.

What got me all teary-eyed, (and of course, I missed the photo op) was the look on his face when he surveyed the world from an upright position. His eyes got surprised, and full of wonder, then a big smile spread over his face. I wish I could share that with all of you. Like I said in an earlier post, I see miracles every day of my life.

Josh still has lots of physical problem. His hips are rotated, and one leg turns inward. His knees are contracted and all of these problems make weight bearing difficult. But Josh is trying, and as long as he tries, we’ll help him.

In my attempt to make our home more exercise friendly I bought a new piece of equipment. I bought a foam roller. It looked like something we could use. When we pulled out the chart of exercises I realized that Josh always sits in a chair. Everything hunches forward. What would happen if we gave him an opportunity to stretch his back and shoulders the other direction?

This is what we came up with.

On this one we supported his legs and hips with the exercise ball, The foam roller is under his spine. This position allows his chest to open up and his shoulders to drop back. His right arm was completely relaxed and touching the floor. He needs to work on relaxing the left arm but his elbow touched the floor. You can tell by the look on his face he enjoyed this position. It had to feel good to stretch his back out.

Baby steps, little by little. I used to resist exercise. In my journey toward optimum health I’m re-discovering the joy of movement. And watching Josh as he walks his own journey is one of the biggest blessings I’ve ever been given.

Such simple moves, tiny goals, huge rewards. I am grateful beyond words to be given this gift. I would not miss one minute of my time with him. We may never get where we strive to be but it won’t be from not trying.

6 Responses to One step at a time