We’re home from the Pikes Peak Writing Conference and it’s time to get back to work. For Josh, this means working out with Abbey. He was so excited. I wondered what two weeks off would do to him but, for the most part, he did fine. His upper body was loose. The lower body wasn’t quite as relaxed. One leg seemed to be fine and on the other the hamstring was pretty tight.

The stretching that Abbey and Josh do in the beginning went normally. Abbey was pretty happy with Josh’s overall condition and Josh was joyful to be moving again. Nothing new or exciting happened during his warm up period so I didn’t get any updated photos of that portion. Josh couldn’t wait to get on the ball. 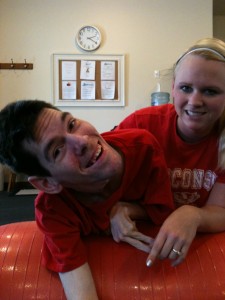 Just looking at his face tells you how happy he is. Every week I try to remember this smile and use it in my own workout. I wish we could all be joyful in movement. Josh was doing head turns before Abbey could get him completely positioned. He was that eager to work. His speed is amazing to watch but he’s also capable of holding each position so his control is improving. I’m more excited by his slow, careful controlled moves than I am when he whips his head from position to position. 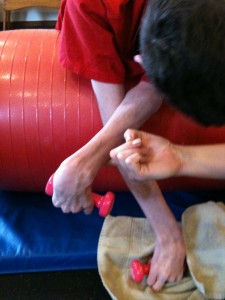 His grip is stronger and he’s holding onto the weights for longer periods of time. Abbey has starting gently raising his arm and he is keeping the weight in his hand. Before, any movement of his arm would pop his hand open and he would drop the weight. Not a big change but an improvement. This journey is all about baby steps.

Abbey asked him to make a bridge and he popped right up. More daylight between him and the mat and his hips aren’t quite as crooked. Again, a baby step and it makes me happy. 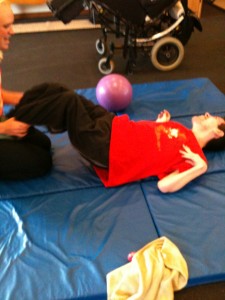 I have to add this picture to the update. I laugh when I see Josh doing this. It seems like such a simple thing, to hold that ball between his arms but you take one look at his face and you know something extraordinary is going on. He knows it. When I see his arms moving inward, against pressure; when I see them moving with equal pressure, I want to sing out in praise, or dance a jig; in some way express my absolute joy in seeing this. What I’m seeing is a young man who can’t find mid-line. Who has trouble balancing his left brain and his right brain. I see him starting to build a communication between the two sides of his brain. He’s beginning to merge the two sides together. Talk about miracles. I see one beginning right here. 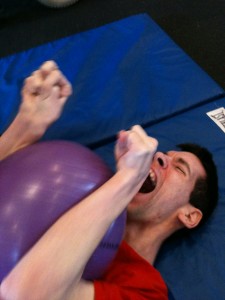 The last picture I want to share with you today concerns Josh’s attempts to bear weight . Abbey and I had been trying to hold him and allow him to stand up. I am having trouble doing this because 1. Josh is taller than I am and 2. Josh is gaining muscle so rapidly that I’m not able to adequately, or safely, hold him.

Abbey tried to hold him yesterday and she isn’t tall enough to give him the range he needs. We have several difficulties to overcome. Josh wouldn’t bend at the hips to allow a proper sitting position. We need that proper position to teach him how to get his feet under him and use his thigh muscles to push upward.

Abbey said she wished she could get some leg exercises done with him sitting and I suggested to her that we put him in his chair; get him sitting correctly, then take his leg supports off leaving his legs free.

We did this and Abbey was trying to get him to push against her hands, firing the thigh muscles but we quickly found out that Josh has a lot of strength in his legs and he was wearing Abbey out. I had an idea and went and got the BOSU ball. This is a ball that has a flat surface on one side, and the cushy ball on the other side. It worked perfectly.

We slid it under Josh’s feet and it was the right height for him to push against. Once he figured out how to use it, he went to town. In fact, he put so much weight on the ball that he darn near turned his chair over backwards and one of us had to be standing behind him at all times.

I noticed that when Josh would pressure bear he would literally tremble from the chest down and I asked Abbey why. She explained to me that his core muscles are the strongest muscles in his body and for him to fire the leg muscles, he starts the energy in his core. He was putting a great deal of energy into the exercise. I wish I had gotten video of it because it was remarkable to see.

Then Abbey came up with the most reasonable explanation of why Josh can’t bend at the hips when we were trying to help him stand. She said because he uses his core muscles to fire up the thigh muscles, if he bent at the hips, he would lose the power of the core muscles. He isn’t able, yet, to isolate one group of muscles from another.

I don’t know where this new exercise will take Josh but I do think we’ll see more lower body development. I think he will gain muscle in his legs and possibly start to be able to isolate the legs from the core muscles and maybe get some useful standing skills. Only time will tell but I was very excited and hopeful that we found this new way to help Josh exercise. 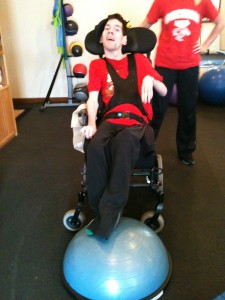 8 Responses to Physical Training update May2012