He took my breath away.

Josh surprises me every week. I like the days when he’s a powerhouse and does what Abbey asks him with energy and strength.

I’m not so fond of the days he’s relaxed. When he lets us move his body and doesn’t seem to participate. I’m never quite sure why but I got a glimmer yesterday. I’ve suspected in the past, he knows how much exercise he can handle during a session. And how tired he is by the end of a session.

Yesterday, he was loose-muscled, relaxed, smiling and pretty much uncooperative. I felt a little sad. I expected more from him.

We were almost through the session, in the last ten minutes of the hour. Josh was back in his chair and Abbey told him they were going to do reaches and I found out why Josh had been so careful earlier in the session.

He’d been waiting for the chair work. He’d saved his energy for the reaching exercise. He wanted to try something and he made sure he saved up enough strength to do it. I very seldom cry when I look at Josh. He’s so vibrant, and sweet. He’s full of love and eagerness for living. I’m proud of him but he did something yesterday that took my breath away. 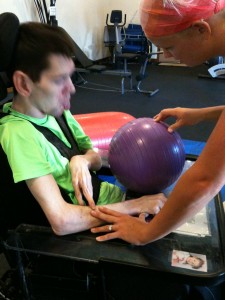 For a few minutes Josh sat there and I feared the whole hour would be him letting Abbey do the work for him but I could see him thinking.

On a regular day, Josh winds up his left arm, going into a hard reflex before he can reach out. But last week, we put his home-made dice roller on his tray and he practiced while I worked out. And we saw him do some pretty amazing things.

Apparently, he thought about that all week because yesterday he held his left arm in front of his chest. Quiet, still, no movement and most of all-no reflex. Very carefully, with full control, he raised his left arm straight up and put it on the ball. I had to fight back the tears. I fight them back now just thinking of what I saw. 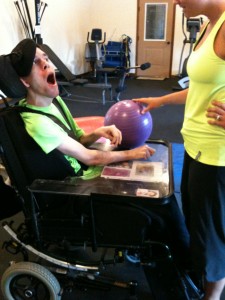 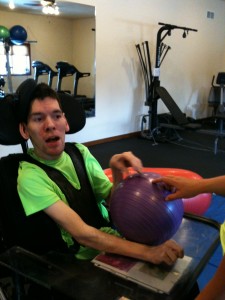 this didn’t happen just the one time. He did it at least four times and he stayed in control for all of them. Until he got tired. Once he wore out, the reflex came back and I understood why he’d been so careful to conserve energy earlier in the session.

He comes into the workout with his own agenda. The lack of speech makes it hard to communicate with Abbey and me.

Before I go onto the next session, I’ll leave one more picture from this one. Abbey pulled the ball away because Josh was holding both arms midline. He was within inches of touching his hands together. She was so proud of him and this photo will show you how proud Josh felt. 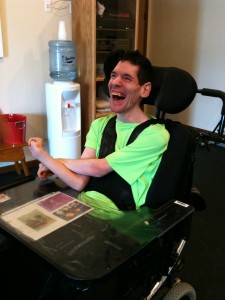 I missed updating last week and want to share a highlight with you.

When Josh first started on the weight bench his arms went down and there they stayed. We were happy just to see him tighten the right muscle groups even if it didn’t move his arms.

Monday this is what we got. 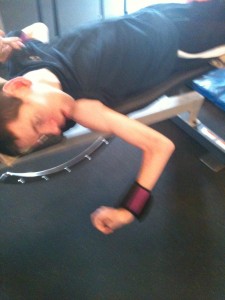 here he visually finds his hand. 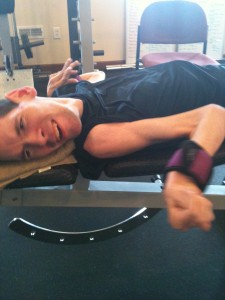 Look where his elbow is and while you’re looking check out his bicep. The next step is to learn to rotate his arm in toward his stomach. He’s got the strength for it, he just needs to figure out the mechanics of it. 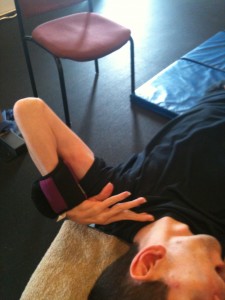 We can’t forget the left arm. He’s getting that one up pretty good.

That’s it for this week. Josh is absolutely loving the work outs. Who knew? I certainly didn’t. Exercise has never been high on my list of priorities. Circumstances have changed my opinion. And every week I watch Josh, I’m encouraged, inspired, and blessed.

13 Responses to He took my breath away.