I love work out day. I think, from watching Josh work, that he does too. His eagerness to move his body, to stretch his muscles to their limit, puts me to shame. I’m going to work hard this week on my own attitude toward health and fitness.

This week, Josh was tight in his legs and Abbey decided that maybe his weight bearing on his legs last week had gotten him just a bit too sore so she told him they would back off of that exercise. Josh didn’t argue with her.

They started with their usual range of motion exercises with Josh lying on the mat. She started with his legs and they were tight and not as responsive as they had been the week before. But on my end, (the head) Josh remained relaxed and reflex-free.

They quickly moved through the stretches and exercises that Josh has gotten used to. She asked him if he wanted to work on the ball or pass it by. He most definitely wanted on that ball and I soon saw why. Josh acted like he had planned out what he was going to do.

We barely got him positioned on the ball, and I hadn’t even taken my place in front of him when he was doing his head turns. Nice ones. Slow and controlled. Then we asked him to do something we’d never asked him do before.

When he relaxed and dropped his head down, we asked him to pick it straight up. No turning it to the side. No using a reflex pattern to help him. We wanted him to simply look up, staying in mid-line and only using the muscles at the back of his neck.

I didn’t touch his head but I held my hands on each side of his head to remind him that we wanted a straight lift without his head going to either side. Abbey touched the muscle group that she wanted him to use and we got this. 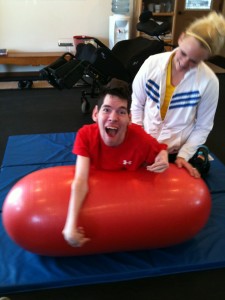 Once again I don’t have words to describe how excited I was. When I describe these exercises, they seem like such simple moves, but when you have a disability like cerebral palsy, none of this is simple. You can still see the reflex pattern at work in his left arm but each week, we’ll work on it and I have hope that someday, that reflex will just cease to exist. That his brain will create new pathways around it.

I missed the other big thing he surprised us with while on the ball. He was back on his knees and looking left, front, and center, when he took it a step farther. He actually rotated his body and instead of just his head turning he was looking behind him using his body from waist up. Abbey told him his lats were on fire. He did this on both sides. I was so startled, I forgot to take pictures. Abbey called him an owl the rest of the workout session. I had never seen him do this move before. I’m betting I won’t miss the photo op next week.

While on the ball, Abbey stretched his legs again. For some reason, when he is on his stomach, his legs get a lot looser. I did get this picture and it shows how much stretch she was able to get. Two months ago when Josh first started working out his legs were so contracted and tight there was very little movement in them. This week, I managed to get a picture to show where he’s at right now. 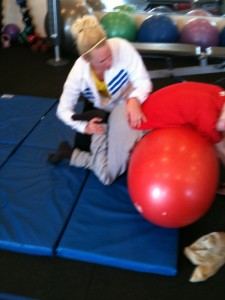 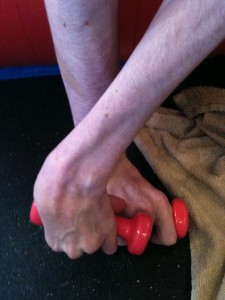 Before Josh left the ball he got to do a little work with the weights. I like this picture because you can see how hard he’s gripping by the ridge in his arm. He’s better with the right hand than he is with the left but you can clearly see he’s gripping both weights at the same time. Holding onto anything is hard for him. He’s making progress and I’m so proud of him.

From the ball he went back to the floor. Abbey put a smaller ball between his knees and Josh moves his legs against the ball. This creates resistance for him to work against. I have video footage of this but so far, I haven’t been able to figure out how to load the video onto the website. When I get it figured out I’ll do an update documenting just this phase of the exercise. I will say this. This week, for the first time, I saw Josh move both legs at the same time. It reminded me of the motion he would need in walking. I loved seeing him create that motion. He may not be upright and weight bearing when he does it but it tells me that his brain is creating the motion that he will need. Seeing him do it made me happy.

From the floor, Josh went back to his chair and Abbey worked with him on moving his arm across the tray. Last week, she got movement from him by moving the paper a few inches at a time. Josh’s movement this week was much faster and broader. He’s gaining confidence. I have video footage of this and will try to document it better when I figure out how.

One last picture. When the session was over, Abbey asked Josh to put his arms straight out with the wrists at the same place. Once again, this is fighting against his reflex pattern. When one arm straightens, the other bends. She was asking him to straighten both arms, at mid-line. He needed help. I chose this photo to end with because 1. he has both arms straight. and 2. I love the way he is looking at Abbey. Josh tries so hard. His focus is so strong. And his joy makes me cry. I hope this picture shares that with you, just a little bit. 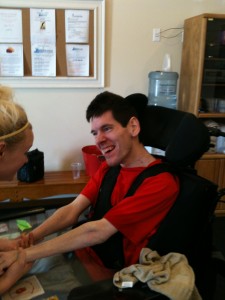 7 Responses to Front and Center