This year has been full of strong energy and change for Josh. His artwork has taken off into a totally new direction. Partly because he’s using a new medium, acrylics, but also because he’s branching out and exploring a new way of expressing himself.

His paintings are starting to have whimsical splashes of abstract sections that inspire imagination and emotion. We’re calling this new style ‘Whimsies’ to differentiate them from my own ‘Flights of Fancy’.

To meet demand for Josh’s artwork he is setting up an online store with CafePress. This will allow his artwork to be put on items such as T-shirts, sweatshirts, blankets, puzzles, mugs, mouse pads and items too numerous to mention. The purpose in doing this is to meet demand. Josh is not prolific and he can never produce enough work to meet the market demand.

Plus, his new ‘Whimsies’ are special and arouse interest and emotion. He wanted to find a way to share the images with as many people as possible. The best way to do this is to sign on with a company that can create the products and handle shipping needs. More information will be coming on this venture.

Josh attended a wheelchair evaluation at Marianjoy Hospital last week. He’s gained a significant amount of weight and his body shape is changing. Gaining size and weight. His old chair is no longer fitting him. The new chair is several months away but it will come and Josh is super excited.

His personal training experience is growing. He wanted more challenge and Abbey is giving it to him. He’s using the weight bench and loving it. 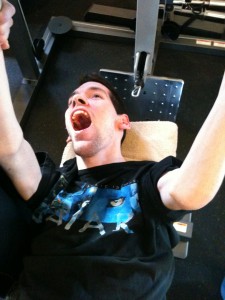 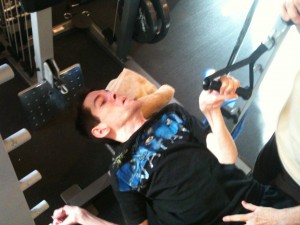 On the top photo Josh grips the bar and is learning the difference between push and pull. He surprised the heck out of us on the pull when he pulled his head and right shoulder right off the bench. We had to scramble to keep him from flipping off of it.

On the pull, Abbey put the stopper guard in place to prevent any possibility of an accident then she unhooked the bar and with both of us helping we let Josh feel a little bit of the bar weight. We knew he couldn’t hold it but we wanted him to understand what he’s working toward. I wish I could bottle up his smile.

When he felt the bar putting weight on his hands and arms he lit up. His eyes blazed with such a fierce light I almost cried. He so wants to be strong and fit.

On the second photo, I am so impressed I don’t have adequate words. The bar is obviously beyond Josh’s capability right now but Abbey asked him to do his arm exercises and he acted sort of bored. So I reached up and pulled down the ring low enough for him to grip it and told him to pull on that.

Giving him something to pull against is all it took. He grabbed hold and hung on and I let go. And, the little stinker held on. The kicker? There was 15 pounds on that ring and Josh held onto it and never let go. He’s stronger than we thought. Stronger than he thought. When he found out what he was doing he got so excited.

His hands were pretty worn out by that time so Abbey held his left wrist and I held his right and she asked him to raise his head. My gosh, he almost pulled himself up to a sitting position and held it.

The PT at the wheelchair fitting told him that if he could get good head control he might consider a power chair. Josh didn’t seem to understand what that meant. I have no idea if its on his radar but I do know this. Josh’s life is very exciting and the energy swirling around him strong.

We’re having a wonderful time and I thank you for stopping by and sharing it with us.